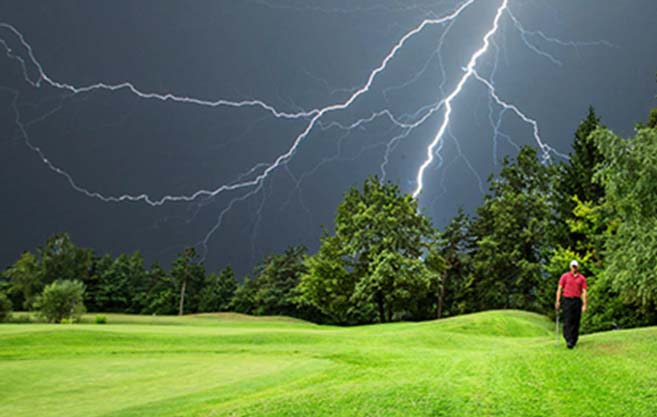 It’s a beautiful sunny day, and you’ve decided to take advantage of the weather by spending some time outdoors.

However, weather can be unpredictable, and as the day goes on, you notice the sky darkening and the wind picking up.

Luckily you grab your hat before heading inside, but are you lucky enough to have chosen the right hat for the weather?

While hats are often worn for fashion or to keep the sun out of your eyes, they can also cause serious safety hazards if worn incorrectly.

While you are prepared to take shelter if necessary, you are also wondering:

Are wearing hats safe in lighting?

In fact, there is a potential danger in wearing hats during a thunderstorm. And some designs of your hats can all act as lightning rods and attract lightning to your head.

Be Careful; Your Hat May Betray You

This is not an alarmist statement. People may know full well that an umbrella in the middle of lightning is a wise move, but they may not think that the hat will betray them too.

In 2018, a Temecula resident was wearing a baseball cap when lightning struck him. This incident is a reminder that hats are not always safe to wear during a thunderstorm.

So, what cause hats to be unsafe?

While any hat can theoretically be unsafe in a thunderstorm, there are four main design features that can make hats particularly dangerous.

4 Designs On Your Hat Have Potential Dangers In Storm

It’s no secret that metal Conducts electricity, which is why you’re advised not to stand under a tree during a lightning storm.

But did you know that wearing a metal-buckled hat could also be dangerous? If the metal on your hat comes into contact with anything that is electrically charged, like a power line or fence.

The electricity could travel through the metal and give you a nasty shock. So if you must wear a hat with a metal buckle in a storm, make sure it doesn’t touch anything that could be electrically charged.

The same goes for any other metal on your hat, like vents or the top buttons. If these come into contact with an electrical current, they could conduct the electricity and shock you.

Even the string on some wind-proof hats can be dangerous in a storm. At the end of strings is often a metal clip that can attract lightning.

So if you’re caught in a storm, it’s best to take off your hat and hold onto it by the string. This way, the metal parts of your hat won’t be touching anything that could conduct electricity.

Are Straw Hats Safety for Wearing In Lighting?

Straw hats are generally safe to wear in lightning storms because they are made of natural materials that are not conductive.

However, if your straw hat has any metal elements (mostly on the strings), those parts could still conduct electricity and shock you.

So it’s best to avoid wearing straw hats with metal elements during storms.

How Can I Ensure My Hat Is Safe to Wear During a Storm?

The best way to ensure your hat is safe during a storm is to check it for any metal elements that could conduct electricity. A magnet will solve this problem for you in most situations.

Metal conducts electricity and can cause shocks if it comes into contact with an electrical current. So if you’re caught in a storm with your hat on, make sure none of the metal parts of your hat are touching anything that could be electrically charged.

Straw hats are generally safe to wear during storms because they are made of natural materials that are not conductive.

However, if your straw hat has any metal elements, those parts could still conduct electricity and shock you. So it’s best to avoid wearing straw hats with metal elements during storms.