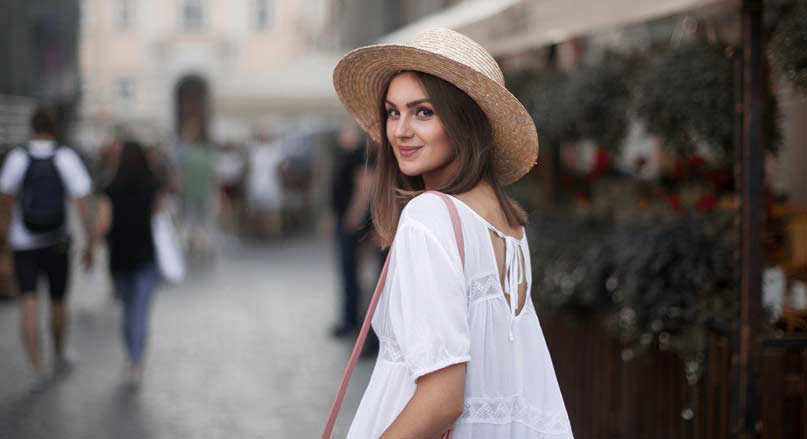 A boater hat has many other names, depending on the region, a boater hat can be referred to as skimmer, basher, straw boater, cady, and in Japan, it is called a can-can hat.

Usually, boater hats are made of straw and have a ribbon at the edge. They were popular with boating and sailing, and thus they derived their name.

In this article, you will learn about what is a boater hat thoroughly.

Boater hats are made of straw, and sometimes they are referred to as straw boaters.

Generally, boater hats are made of sennit, which is a stiff, flat straw. The straws should have a natural color and should also be balanced.

The straws can either be plaited or braided to make a boater.

The boater usually has an elliptical shape with a flat brim and flat crown. The boater’s crown is also known as a telescope crown and a ribbon that runs down.

Boaters are a rare sight nowadays, and the other form that has replaced them are Panama hats or cowboy hats.

However, they can be seen as part of school uniforms in New Zealand, the United Kingdom, Australia, and South Africa.

The shape of these hats is good for shading people from the sun.

What a Boater Hat is: History and Origin

Boater hats are wide-brimmed headgear edged with a ribbon and made out of straw.

Been popularized in the late 19th century towards the early 20th century, boater hats were worn by Gondoliers in the city of Venice.

Boaters would be worn in universities and during sporting events. The earlier versions of boater hats had wider brims than those seen today.

This was during the 19th-century fin de siècle till World War I. However, after this period, they changed into narrower brims, and it was popular in Germany.

It was known by the colloquial term Kreissage, which can be translated into a circular saw. It was referred to as the Florentine straw hat.

In Madeira, they would be worn by drivers of toboggans, traditional wicker.

They were referred to as carriers, and they were spotted on the drivers transporting visitors from the Monte (Funchal), the parish church, to the Funchal center.

There are many uses for boater hats, and they are even part of uniforms in universities bands.

There is a straw hat day whereby men switch from winter hats to summer hats. However, the straw hat day varies from one place to another.

The straw hats worn by women were pinned with hatpins to prevent them from falling off.

Boater Vs. Panama Hats: What Is the Difference?

Panama hats have different shapes, and at other times they have the same shape as boater hats.

They are both made from straw, but boaters are made from sennit straw and Panama hats from toquilla straw.

Panama hats are made from Ecuador straw, and thus they are referred to as Ecuadorian hats.

Boater hats have lost their popularity and are not worn often. They are integrated into uniforms, but Panama hats are pretty popular.

They are ranked as the biggest export of Ecuador. However, as fashion changes, the styles and tastes of individuals change as well, and they might keep rotating.

Boater hats are suited for casual and semi-formal wear, while Panama hats are for semi-formal, casual, and beachwear.

Boaters are suitable for rowing events, boating, and sailing activities.

They are both suited for unisex wearing during summers because they are lightweight and breathable.

Besides, both boater hats and Panama hats are both not suitable for cold weather.

What Do You Wear with a Boater Hat?

Both men and women can wear boater hats. They can be paired with uniforms as it is quite popular in schools in Europe.

Some formal wear for women goes well with boater hats and in men.

A formal event such as evening dinner with a vintage theme can be good to wear a boater hat.

Where do people wear boater hats?

Boater hats can be worn on various occasions, and they can be integrated as a theme at events.

Most people wear boater hats during summer as a semi-formal, casual outfit accessory.

You can also wear a boater hat at the beach, or during boating events.

What years were boater hats popular?

Boaters were used during the late 19th century to early 20th century when they gained popularity.

Why is it called a boater hat?

A boater hat gained its name since people at sea used them.

During fishing and sailing escapades, boaters were used more, and thus they derived their name from that.

What is a boater hat for?

However, they can be incorporated into fashion because they have ribbons that add to their boat.

They are used as uniforms in some schools and bands such as music bands.

Boaters are vintage and if you are looking for a vintage look, go for this hat.

They were popular during the 19th and 20th centuries, designed in Venice.

You can also look for Panama hats, but boater hats are the real deal, and you should have one in your collection.