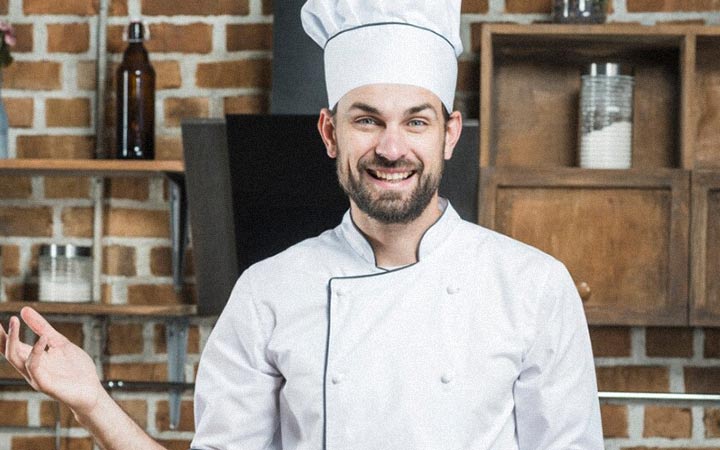 Chefs do wear different kinds of hats that are part of their uniform. But the most iconic of all these is chef’s tall white hat. This hat has been an essential part of a chef’s uniform for centuries and is still worn today by chefs in many countries worldwide.

But why? Have you ever wondered why chefs wear tall hats? Although it may seem like an odd fashion choice, there is a lot of history and meaning behind the chef’s traditional tall hat.

Let’s take a closer look at these iconic headpieces’ history, meaning, and functions.

The History of Chef Hats

Chef hats originated in the 1800s when chefs wanted to distinguish themselves from other kitchen staff.

They chose to wear white to stand out, but they also needed something to keep their hair back while working.

Thus, the chef’s tall hat was born! The height of the hat was traditionally determined by how long it took for a piece of egg white to cook—the longer it took, the taller the hat!

Nowadays, this method is no longer used; most chefs’ hats are around 11 inches in height.

The Meaning of the Height of Chefs’ Hat

Although not as literal as before, there are still various meanings associated with the height of a chef’s hat.

Generally speaking, a taller hat indicates greater experience and expertise in the kitchen. This is why executive chefs will often have taller hats than sous chefs or cooks.

Additionally, many believe that having this extra bit of height gives them more confidence in their kitchens which helps them lead by example.

The Functions of Chef’s Hat

In addition to representing experience and authority within a kitchen setting, chef’s hats also serve several practical functions as well.

For starters, they help protect against hot steam and splatters from hot oil or boiling liquids coming into contact with your face or hair.

Additionally, they can help absorb sweat so that it doesn’t drip into food while preparing meals.

The brim also serves as an extra barrier against foreign objects like dust or particles getting into food while prepping ingredients or plating dishes.

As you can see, there is much more to a chef’s tall hat than meets the eye!

From its historical beginnings to today’s modern practices within restaurant kitchens worldwide, this iconic piece has become an essential part of any professional cook’s wardrobe.

And now you know why! While there is certainly something to be said about looking sharp in this timeless headpiece for anyone in the food service industry.

Whether professionally or as a hobbyist – there is also plenty of history and meaning behind its design that makes it just as attractive from an academic perspective!